In Season 1 of Ted Lasso, there’s a moment in which the insufferably arrogant Jamie Tartt gets his comeuppance. Nate, a frequent victim of Jamie’s cruelty, cannot contain his glee. But Coach Lasso isn’t having it. “No, no, no,” he tells Nate. “This is a no-schadenfreude zone.”

Schadenfreude, which refers to the pleasure you feel at another person’s suffering—particularly a person who, you believe, deserves to suffer. This German word having a  cultural moment in the English-speaking world, as you can see from the ngram chart below (Google’s ngram viewer charts the frequency with which a word is used year-by-year): 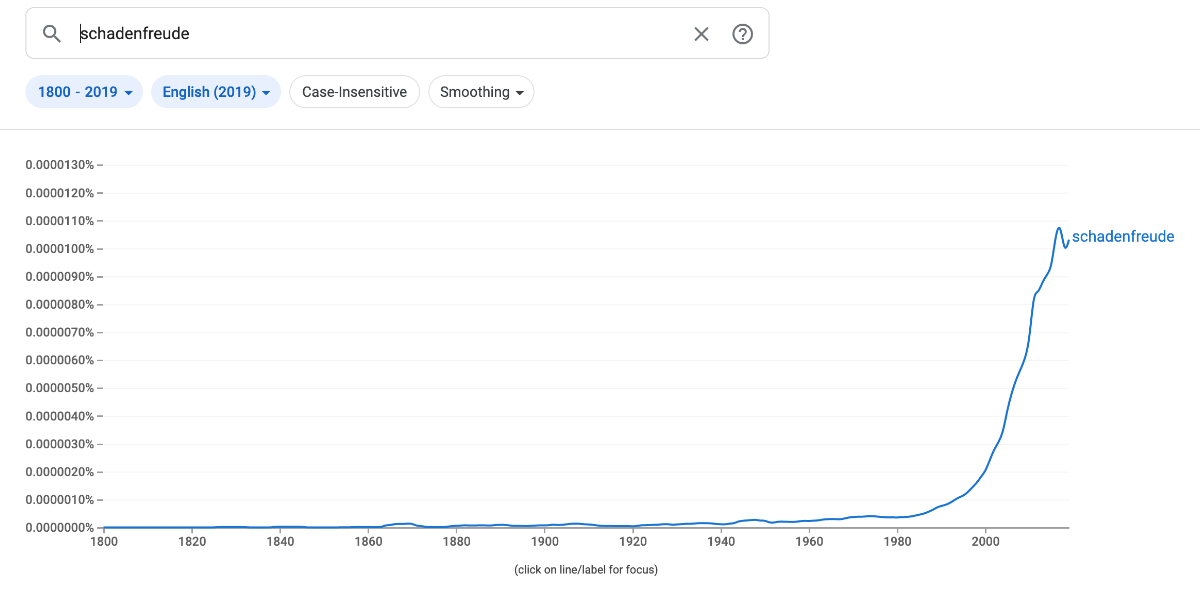 I got to looking at lists of untranslatable words. I thought you might find some of them interesting. [Note: the more I looked into these lists, the more of the words turned out to be bogus or misinterpreted…hopefully the ones below are not bogus.]

Gigil (from Tagalog): The feeling you get in the presence of overwhelming cuteness—especially the cuteness of babies and puppies. An uncle of mine, in the grip of gigil, once said, “You’d better get that baby away or I might take a bite out of her.” Thankfully the baby didn’t understand English.  Here is a video of some Filipinos talking about what gigil means to them.

Kummerspeck (from German): Literally “grief bacon.” Refers to the weight that might be added as a result of “eating one’s feelings.”

Myötähäpeä (from Finnish): Literally “co-shame,” the second-hand or vicarious embarrassment you feel when you see another person acting like a fool. Myötähäpeä is what you’re feeling when you watch The Office. The German word fremdschämen means the same thing, just with fewer umlauts. Myötähäpeä/fremdschämen is essentially the opposite of schadenfreude. Rather than enjoying the misfortune caused by another person’s foolishness, you feel the fool’s misfortune with him.

Tsondoku (from Japanese): the practice of buying more books than you will be able to read. I’ve got a bad of tsondoku myself.

Hygge (from Danish): I started hearing about hygge (pronounced hoog-ah) a few years ago. Hygge is coziness as a philosophy or way of life. Think how cold and dark Denmark is in the winter. Then think how seriously you’d have to take your little creature comforts (thick sweaters, warm socks, a crackling fire, hot drinks, etc.) in order to stay comfortable and sane. That’s hygge. An article from Harper’s Bazaar puts it this way: “it’s not just about warm lighting and candles. Hygge is also a mindset – it’s about relaxing and being kind to yourself, rather than going without a certain food type or drink, or embarking on any sort of activity that could be emotionally overwhelming. Hygge food is comforting and soothing, rather than healthy – think pastries, cakes and pies.”

Sehnsucht (from German): You may know this one from C.S. Lewis’s autobiography, Surprised by Joy. Sehnsucht is a longing or yearning for you know-not-what. In the absence of a better English word, Lewis called this feeling Joy—“the stab, the pang, the inconsolable longing” that brings more satisfaction than any earthly consolation every could. Joy/sehnsucht, according to Lewis, is a clue to the meaning of the universe and our place in it. If we all feel a homesickness for a place we’ve never been, maybe this earth isn’t our home.

If you want still more untranslatable emotions, here’s an article from the BBC.

The Dictionary of Obscure Sorrows

Perhaps the most well known of Koenig’s made-up words is sonder:

n. the realization that each random passerby is living a life as vivid and complex as your own—populated with their own ambitions, friends, routines, worries and inherited craziness—an epic story that continues invisibly around you like an anthill sprawling deep underground, with elaborate passageways to thousands of other lives that you’ll never know existed, in which you might appear only once, as an extra sipping coffee in the background, as a blur of traffic passing on the highway, as a lighted window at dusk.

I’ve seen this one floating around the Internet; at first I was under the impression that it was one of those untranslatable words from another language, but actually it’s a neologism. It’s a good neologism, though. I appreciate the way Koenig takes it on himself to fill in gaps in our language.

In this TED talk, Koenig talks about what it was like to start seeing his word sonder in the wild, even overhearing it in a conversation between strangers. I had a similar experience myself, during the short period in my youth when I believed myself to be the originator of the phrase “so close and yet so far.” I slipped this felicitous phrase into a few conversations here and there. I was amazed at how quickly other people started using it—but, then again, it was a pretty clever and useful phrase. However, when somebody used it on a rerun of The Brady Bunch, in an episode filmed when I was a baby, I had to acknowledge that I was probably not the first to employ the phrase.

But I digress. If you have eight spare minutes, you should check out that TED Talk by John Koenig. He makes some interesting points about where words come from and what constitutes a “real” word. In the end, I don’t agree with his conclusions. He argues that our ability to make up our own words is proof that we should also make up our own meaning. But the magic of Koenig’s made-up words, it seems to me—indeed the magic of all words—is that they give us ways to talk about meanings that were there all along but that we didn’t know how to talk about.

Previous
Hannah Hubin on Collaboration
Next
Dave Barnes Gets Awkward